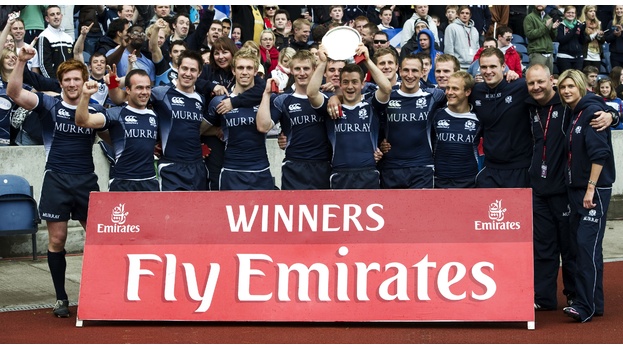 It was announced in 2007 that Scotland would become a host for the World 7s Series, alongside the United Arab Emirates, Australia, New Zealand, USA, England and Hong Kong. Despite the fact the Scottish team weren’t as consistently brilliant as teams like Fiji, New Zealand and South Africa, there was still an excitement to see the highest standard of 7s be brought to the land that invented the game. Since 2007, the Scottish Rugby Union have invested a lot more money into the Sevens team, and are now able to pick players from the national academy, giving them a full-time contract to play and train around the world. It would be biased to say Scotland competed with the top teams in the series on a consistent basis, as, bluntly put, they didn’t. They might be able to scrape past the Samoans, or South Africa now and again, but were being beaten and knocked out before they could even reach the final rounds of the Plate. Despite boasting such outstanding talents such as Colin Gregor or Andrew Turnbull, the Scots have never actually placed inside the top 6 of the final points table since the competition started. But there is hope yet. In the current table standings, Scotland sit in seventh place, and even with the on-going pressure of their future, the team are performing as well as they ever have. Near the end of last year, it was understood that Scotland would lose their leg of the series, possibly to France, who, incidentally, they had won it from nine years previously. With the loss of the tournament, could also come the loss of the Scottish Sevens team on a full-time basis. Though the Scottish leg of the circuit only pulled in a maximum attendance of around 15,000 over the weekend, it was still a crucial piece of revenue for the SRU. The almost certain loss of the event, has led to the SRU reviewing the future of the sevens team, and are expected to make a decision as soon as this Thursday. This in turn has caused thousands of fans to speak out, urging things remain as they are. Even Ireland – the perennial 7’s sceptics - are looking to invest in this new Olympic event, something they have never done on a serious basis before. The benefits of sevens would have to be examined first. Is the circuit developing players for the 15-a-side game? You would only have to look at some of the former players, who have now become stars in the Scottish game. Mark Bennett for one, is a player you would think was born for 7’s, and not being lined-up against bruising international centres. However, his successful showing in the 6 Nations has shown he is someone who has easily adapted with club and country. He is quick, strong and could run all day, attributes that are essential in the sevens game. Roddy Grant is another whose talent was spotted for Scotland sevens, and his transfer of those skills have meant he has become a key player for Edinburgh. The sevens series is an excellent place to develop some of the finer skills in rugby, something which Scotland surely needs. However, often it does seem as though some of the greater talents are being kept within the Sevens team during their peak, for the sake of the possible Scotland 7s success. Current players such as James Johnstone, Mark Robertson and Russell Weir are just a few examples of players who were never given an extended run, or even a debut, with either Glasgow Warriors or Edinburgh. These are players who are lighting up the sevens tournaments, but they continue to age, and one might worry it may take too long for them to really find form immediately if they were thrust back into a pro XV. Does a team have to host one of the legs to be successful? Not really, you only have to look at the Fijian and Samoan trophy cabinets to understand that. It was disturbing to read that Scott Johnson, former Scotland head coach, and now director of rugby, reportedly earns around £250,000 a year for whatever it is that he does, whilst the Scottish sevens team earn around £25-30,000 per annum. Remove Johnson from the equation, and instantly you have that cash to cover around 8-10 of the 7s players. It would be enough to keep them training, allow them to pay for necessities when back at home and ultimately, have them remain in the World Sevens Series. It is understood that World Rugby, the governing body for rugby union, covers the cost of flights and accommodation for all full-time teams who compete in the series, so the reported £1 million that the SRU claim they have to spend to fund the sevens team each year is difficult to fathom.

There is a train of thought that the threat of pulling Scotland's Sevens team out of the World Rugby series is part of a political move by the SRU, in part due to the removal of a Scottish leg. "Why should we back them when they take something from us?". There are some who say stopping the sevens team altogether might be a handy option, with the possibility of creating a new Scottish professional club side. The possibility of having a third team is an exciting thought, especially with Warriors and Edinburgh performing so well recently. Yet, it might be a massive risk, especially considering two sides amass a quite disappointing average attendance of 9,000 between them, with only Zebre and Treviso, the two Italian sides, creating a lower average, and they might be on their way out of the Pro12 league. So a newly former club might do more harm than good for the future of Scottish rugby. It is an interesting thought to mull over, as much as we would be disheartened to see the inventors of the abbreviated game fall from the world series, however it could be argued that the money used for the sevens squad, might be better used elsewhere. What are your views on the future of Scotland Sevens? Should they remain as they are, or would you like to see it scrapped, with the more local Borders competitions being enough for you? Give your opinion on our Facebook page.
Share Share on Facebook Tweet Tweet on Twitter Pin it Pin on Pinterest
Back to Rugby Stuff News
Example blog post
Example blog post
Example blog post