Skip to content
Free UK Delivery on orders over £50
EXTENDED CHRISTMAS RETURNS INFORMATION
PERSONALISATION AVAILABLE FROM £3
It's now the 7th of December and if you ain't well on the way to being organised for Christmas yet, then why not?! Get on with it or Santa will very disappointed with his helpers! Here are some ideas and inspiration from the First XV elves workshop. 1. When I grow up, I'm going to play for Scotland. 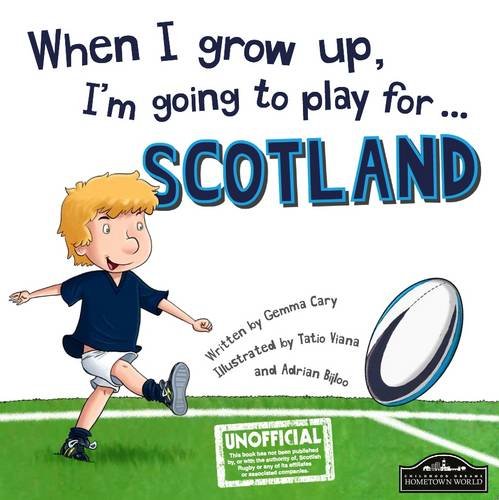 The ultimate book for any Scottish Rugby fan in his mini years, telling the story of one young boy's journey from receiving his first rugby ball through to winning selection in the 1st XV of his local team. If you've broken out of the mini ranks, and are still a bit baffled by rugby, then try this book... 'Rugby Made Simple (for baffled spectators)'. 2.  SafeJawz SafeJawz are a new range of mouth guards which will look just brilliant spilling out of a Christmas stocking, and at £10, they should hit the mark nicely.  These mouthguards feature cracking designs such as Goldie, Orge, Fangz, Shark and Mo. They're not all show and no substance though, with features such as Jaw Impact Pads and Remodel technology. 3.  Under Armour Imperial Collection Under Armour are building up a reputation for partnering with big names in showbiz, first came Marvel and DC Comics, next up was Muhammad Ali (watch this space for a range in store in February 2016) and now we can add Star Wars to that burgeoning  list. The Imperial Collection has been launched in time for the release of "The Force Awakens' on the 17th of December.  Darth Vader and Storm Troopers are at the core of the range which includes HeatGear baselayers as well as loose fit tech tee's - there is no excuse not to join the 'dark side' this Christmas!

4.  Adidas Super Rugby Collection Today saw the release the New Zealand-based Super Rugby sides rugby shirts for the 2016 season.  We are not sure how it is possible, but Adidas have raised the bar yet again, truly stunning sublimated designs which were produced in conjuction with Maori All Blacks kaumatua Luke Crawford and renowned local artist Dave Burke. Any rugby fan will be unable to keep the smile off their face if they unwrap one of these on Christmas morning!

5.  All Blacks - Black to Black Tee This year, the All Blacks achieved a world first, as they became the first team to successfully defend their RWC title, with the 2015 Rugby World Cup joining that of the one won 4 years previously.  In that moment, a term went viral on social media throughout the rugby fraternity. Back to Back became Black to Black and now we can present to you the official Adidas New Zealand Winners tee, with Black to Black emblazoned across the chest.  Sure to become a collectors piece for any AB's fan.

6.  Electric Boot Pack At the start of the 2015/16 season, Adidas released a boot range that would be worn by the professionals during the 2015 Rugby World Cup. Now that the tournament is over, the sport giants have brought out an updated collection that will be seen on the players throughout the 2016 Super Rugby season. Made up of the Kakari for the tight five, FF80 for the quicker back rows, Predator for the kicking specialists and Crazyquick Malice for the fliers in the backs, the Electric Yellow range will brighten up any Christmas morning!

7. Gift Vouchers If you're totally stuck for ideas or your intended recipient is a "fussy so-and-so" then take the easy option and get a gift voucher. Any value you fancy and no expiry date on them, plus the ability to use them in store and online! It's a no brainer, and another tick in the done list! Hopefully we have progressed your Christmas 'to do list' on a bit, don't forget to check out all our Christmas info here.  Extended opening hours, extended returns policy, closures and opening hours between Christmas and New Year.
Share Share on Facebook Tweet Tweet on Twitter Pin it Pin on Pinterest
Back to Rugby Stuff News
Example blog post
Example blog post
Example blog post