Skip to content
Free UK Delivery on orders over £50
EXTENDED CHRISTMAS RETURNS INFORMATION
PERSONALISATION AVAILABLE FROM £3
Here we are, one week into the 2015 Rugby World Cup, and what a week it's been. We kicked off with an opening ceremony at Twickenham, followed by hosts England defeating Fiji, in what was an unconvincing win for the home favourites. https://www.youtube.com/watch?v=Z3Mbd9W9u50 But one thing that has really stood out in the opening days of this tournament are the performances of the so-called smaller nations. In previous years, the likes of Uruguay and Namibia would be the whipping boys of the Rugby World Cup, but that's not the case so far. The Tier 2 nations (and in the case of Namibia, Tier 3) have far exceeded the expectations of most, but undoubtedly the highlight would have to be Japan emerging victorious over South Africa. The first upset of the tournament came when Georgia beat the higher ranked Tongans, but Japan’s win over the Springboks took things to a whole new level! https://www.youtube.com/watch?v=1ghArmsJjQM And the celebrations were just as good! https://www.youtube.com/watch?v=JXhrwadiFQ4 So what's changed? Well in Japan's case, they have an extremely lucrative league which frequently sees them entice players from around the globe, as well as the injection of boundless resources, thanks to the world's third biggest economy. They have also have 53,000 registered senior male players - almost double the amount of New Zealand. And with the nation hosting the next Rugby World Cup, it's become a serious sport. Namibia, on the other hand, are an entirely different kettle of fish. In the words of their head coach, former Wales international Phil Davies, "There is no comparison [between Namibia and Japan]. Japan are a fully professional team. All we can do [against the All Blacks] is go out and play to our full potential and give a good account of ourselves." And that they did. Many were expecting a century of points from the current World Champions, and after the first 10 minutes, they were already 15-0 ahead. But the anticipated hammering didn't quite materialise. Of course, the New Zealanders were always too strong, too powerful and professional in their nine-try triumph but with their second half try, Namibia captured the hearts of all in the Olympic Stadium, and gave hope to the smaller nations watching on. 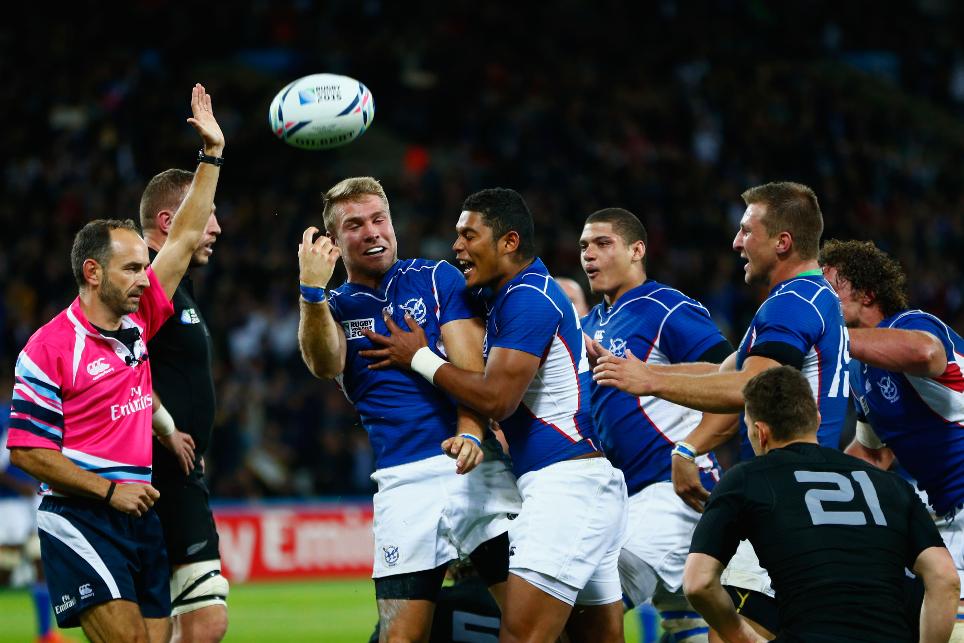 Elsewhere, Ireland and Wales secured victories against Canada and Uruguay respectively, but not necessarily by the convincing scoreless that were expected. In fact Uruguay lead Wales 6-0 after 10 minutes and were only 19 points behind at the break. We are now a quarter of the way through the competition, and hopefully there are still plenty of upsets and courageous performances to come! Could the next one be in Match 13 between Argentina and Georgia this evening? It kicks off in Gloucester at 4.45pm. If you are yet to get your team kit, it’s not too late! Visit rugbystuff.com now and buy your Rugby World Cup gear online today.
Share Share on Facebook Tweet Tweet on Twitter Pin it Pin on Pinterest
Back to Rugby Stuff News
Example blog post
Example blog post
Example blog post